This week’s mini-recaps of The Flash, Arrow, and Legends of Tomorrow.

THE FLASH: “Escape From Earth-2”

The second half of our two-parter begins with Zoom scouring Earth-2 Central City in search of Harrison Wells. Cisco finds him in hiding at STAR Labs, where Earth-2 Barry has woken up and is quite livered with all these chaps for daring to kidnap him like this! Before our heroes can explain or escape, Zoom arrives and starts tearing STAR Labs apart. This successfully branches the plot in three directions.

They hide out in Wells’s time vault (because of course he has one), while Zoom returns to his hideaway to taunt Barry and Jesse. The heroes escape, recruit (and inform) Iris, and set themselves on the hunt for Killer Frost, who might be the only person on Earth-2 capable of leading them to Zoom. They find her, she attacks them, they win. Appealing to her shared loss with Earth-1 Caitlin, Cisco convinces Frost to help, and she brings them to the redundantly named Ascension Cliffs.

In Zoom’s lair, Barry and Jesse get to work trying to decode the messages being sent to them by the mysterious Iron Masked Man in an adjacent cell. They make out the letters “J-A-Y” before Zoom arrives, phasing through the cell door and beating Barry a bit for his insolence. Before Barry can capitalize on his new knowledge of how to escape, Team Flash arrives and rescues Jesse. They can’t figure out how to break Barry out, and he tells them to leave him.

Meanwhile, on Earth-1, Jay and Caitlin are struggling to defeat Geomancer, only making headway after Caitlin successfully invents Velocity-9 to power Jay up to his maximum and save a building full of civilians as the villain destroys it. As Jay recovers back at STAR Labs, Geomancer attacks and is subdued by Iris and Caitlin. In better news, the Velocity-9 seems to have jumpstarted Jay’s regenerative abilities, potentially saving his life.

Jumping back to Earth-2, Barry-2 (this is getting confusing) gives his alternate self a pep talk, that if he can do the impossible, so can the Flash. So of course Barry frees himself, and of course Zoom arrives before they can free the Masked Man. Caitlin turns on Zoom, giving them time to escape.

On the other end, Jay and Joe begin repairing the breach, the former creating a vortex strong enough to hold the breach at bay and the latter flipping some switches to stabilize it. Cisco and Jesse head through first, while Barry tries to free Harry from an arriving Zoom. He succeeds, and they make it back, but not before Zoom’s fist reaches through the breach (and through Jay’s chest), pulling our newly minted Flash back to his home dimension. 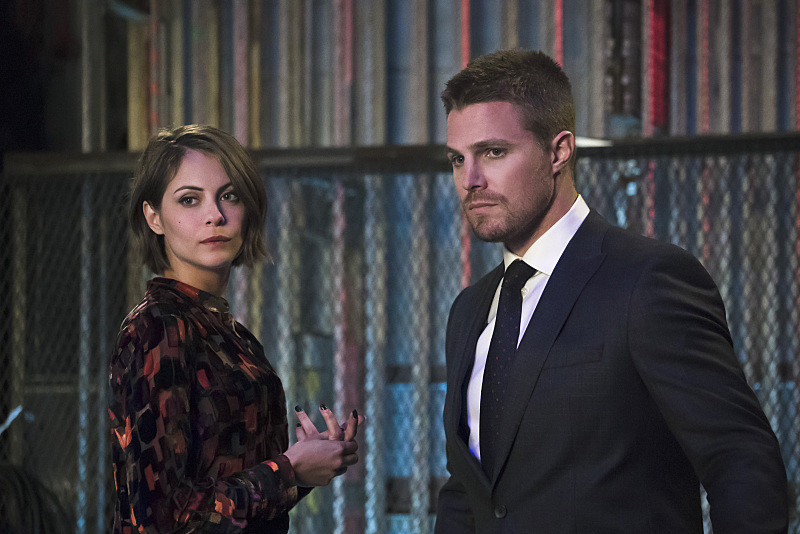 Well if nothing else, there are some interesting ideas at work here. Firstly, Oliver’s civilian guise being more of a threat to Damien Darhk’s machiniations than his vigilante one has been a running theme on this show, and the idea to pull focus on it is a good one, just with very dull results (most of this show’s political plots have been non-starters).

Secondly, we get some shakeups with side characters. After losing his empire and his hand, Malcolm Merlyn has very quickly landed on his feet in Dahrk’s inner circle, bringing his intimate knowledge of the Green Arrow’s operations. Whether or not he’s told his new employer the Arrow’s identity or not is uncertain at this time (or else I missed it). Officer Captain Detective Lance being put directly into Darhk’s crosshairs for his treachery is also fun, though the timing of this makes it feel as though the show is merely swapping one treacherous side antagonist for another because it still wants someone for Oliver to make mean faces at for betraying him. It doesn’t help that Lance does the painfully stereotypical thing of rejecting Donna “to keep her safe.” Not a great season for Lance, though his showing up to help Team Arrow clear the debate hall of baddies despite knowing it might get killed is a good character beat.

Thirdly, a lot of stuff gets destroyed. First, a hotel where Lance (accompanied by Laurel) was lured to and nearly killed; secondly, an officer building where Team Arrow was similarly lured to and Diggle nearly killed.

Also the flashbacks are still happening, I guess. Oliver kills the angry bearded guy so the stupid captives trust him, so he can complete his mission against the dull mercenary guy.

The only plot that gains any traction is where, in an attempt to dig up dirt on Oliver’s new political rival (Damien Darhk’s rival), discovers the secret about his son and convinces him that keeping the promise he made to the mother of his child isn’t a betrayal to Felicity.

Anyway, the good news is that last year, this sort of do-nothing, go-nowhere episode with murky villains and murkier character motivations was the norm. This year, it’s just a speed.

In an effort to be less recappy, I’m going to start writing these after I finish the episode, so bear with me if I forget a few names and the chronological order of things. Besides, this show gets more mileage out of its character pairings than its scene-to-scene plot.

Snart and Sara continue their sterling rapport by first teaming up to break into Savage’s Gulag to free their “comrades,” as Rip so sardonically puts it. They also bond over being the team’s liquid assets, useful for their skills and not much more. While this is true for the team as a whole, these two (and Mick, to be fair) possess skills that most would see as…less than savory. So even though they go their separate ways once inside, when Sara has her finger on the trigger and is about to snipe Stein so Vostok and Savage can’t use him to create a Soviet Firestorm, it means more to have Snart be the voice on the other end of the line telling her not do to it — not to be the simple killer Rip recruited her to be.

Tonight’s other major pairing is Mick and Ray, one that hasn’t seen much action together, but yields unexpected results. When Ray gets himself beaten into unconsciousness in the prison yard for being too much of a boy scout, Mick mocks him for it. But when Ray gets himself beaten unto unconsciousness by Savage’s thugs, Mick thanks him by dragging him out of the proverbial fire (the bit with Mick swiping a liter from a passerby and spending half the episode just staring at it was a nice touch). His rationale is simple: they were in the shit together, and Ray threw himself on the grenade and took an asswhooping. Whether or not he needed to, Mick is a straight enough shooter to appreciate that, even if Snart can’t when he arrives to break his partner out.

One of this show’s recurring themes is finding new and decidedly uncreative ways to keep a few characters “on the sidelines,” as Jax, who literally cannot stop referring to everything in football terms, puts it. Tonight it’s Jax and Kendra, who as Rip very astutely remarks, are the two people Vandal Savage wants most in the world right now. What Rip doesn’t know is that once Savage figures out that Stein is Firestorm, he already has a willing partner for him to merge with (I seem to remember both parties’ consent being a big part of the original Firestorm pairing but whatever): Vostok.

When the gulag inevitably descends into chaos after Jax shuts off the power, Rip “kills” Savage again (but not before taking back the watch that was stolen from him two weeks ago) and escapes with the rest of the crew as Vostok, separated by force of will from Dr. Stein, melts down and detonates (probably killing everyone else there, too. So much for not being killers!).

Anyway, it’s a perfectly decent second half that manages to introduce and kill off several generic antagonists (though Vostok had her moments) and advance most of the show’s core relationships. This show still sort of feels like a miniseries, so it’s good that most of the plotlines thus far have been big enough to be two-parters. Chronos shows up again at the end and screws everything up, as he is wont to do, forcing the ship to crash land somewhere in 2046 Star City and setting us up for a confrontation with the future Arrow next week.

Entertainment reviews and commentary since time immemorial (or 2013).